This lovely, recently built 5/6 bedroom villa (completed at the end of 2012), is located in Quinta do Lago, and is decorated to a very high standard.Excellent pool area highly recommended. Located in an ideal position within the resort of Quinta do Lago,walking distance to Quinta Shopping and Buganvilia Plaza, where you will find a great selection of fine restaurants, bars, shops, a nightclub, supermarket and pharmacy. The Villa: There are 5 bedrooms en suite situated on the ground and first floors, plus a multi-use bedroom situated on the lower level next to the games room, ideal for teenagers’ use. Outside, there is a very nice garden that enjoys a lot of privacy. You can enjoy fresh meals on the covered barbeque terrace overlooking the pool and lounge terrace/ garden area, which features a cascade water fall and a child/ paddling pool. Located in an ideal position within the resort of ...

...Quinta do Lago, within walking distance to Quinta Shopping and Buganvilia Plaza, where you find very nice restaurants, bars, shops, a disco, a supermarket and a pharmacy- and you are just 4 kms away from the beautiful white sand beaches of Quinta do Lago. Ground Floor: Bedroom 1: This smaller bedroom features a twin sofa pull-out bed that can be converted in a double bed, with an en suite shower room. Bedroom 2: (Grey Room): This can be prepared as either a twin or double bedroom with direct access to a private terrace overlooking the pool / garden area. There is an en suite bathroom with walk-in shower. TV. Bedroom 3: (Brown Room): This can be prepared as either a twin or double bedroom, and overlooks the pool and garden area. TV. En suite bathroom with walk-in shower. Living Area: Lovely sitting area, with 2 comfortable big sofas and Moroccan puff chairs overlooking the pool/garden and lounge terrace area. TV, DVD player and Music System. Access to the Dining area. Dining Area: Big wooden table which seats maximum 14 persons, with a charming Moroccan mirror on the wall and a lit cabinet . Direct access to the barbeque terrace area and kitchen. Kitchen: Fully equipped kitchen with separate big freezer and big fridge; dishwasher; juicer; coffee machine; microwave; kettle; oven; electric stove (4 rings). The kitchen also has an American breakfast table with 2 high seats. Direct access to the laundry, which is complete with a washing machine and dryer. Access to the BBQ area through a corridor. Outside: There is an exterior shower room next to the barbecue area for the pool users. There is a music system with 2 speakers outside in the lounge covered terrace next to the pool and garden area. There are 2 outdoor sofas in the lounge area surrounded by a beautiful atmosphere with nice transparent curtains, lots of candle lanterns, sun beds placed on the wood decking terrace around the pool or on the lawn grass area, where you can relax and enjoy the sound of the water cascade, the ambient music sound, or simply the birds that live around! First Floor: On the first floor you will find the 2 Master suites and an extensive circular outside terrace with a private area for each of the rooms. Bedroom 4 (Beige): This Master suite can be prepared as a twin or a double bedroom. With a private dressing area, TV and an en suite bathroom with Jacuzzi bath overlooking a fantastic country view.This big bedroom is ideal to people who want to have some relaxed and quiet time reading, sunbathing or simply drinking a fresh orange juice on the private outside terrace. Bedroom 5 (Light Blue): This Master double suite with white linen curtains features a TV and a private dressing area, as well as an en suite bathroom with a corner Jacuzzi bath and a separate shower unit, both enjoying amazing views of the surrounding landscape. A private terrace with 2 sun beds is ideal for people who want to have their own personal space away from the common areas. Basement Level: Games Room: if you are looking for fun, this is the ideal space for you! In this big games room with windows you will find: a Snooker table, Table Tennis , big flat screen TV with internet connection; Playstation 3 , baby area (complete with a carpet with a small table and chairs, and with some baby / little child games), surround sound music system and DVD player. Multi-use bedroom: This big bedroom is ideal for teenagers who want to be next to the games room area and away from the main house area, enjoying their music and playing with everything around! Here you will find 2 x twin sofa pull-out beds with a capacity for 4 people, 4 puffs and a private music system and a football table. This bedroom is charged as a supplemental extra for larger groups of more than 10 persons. Garage: there is a garage available for the clients use with space for 2 vehicles. 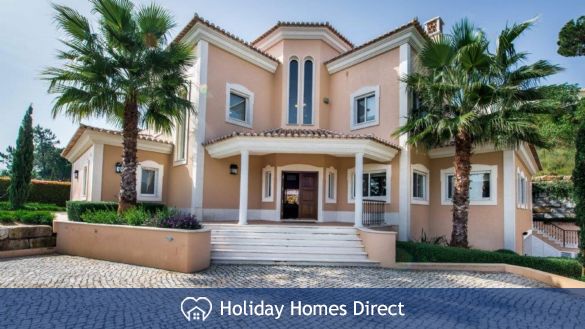 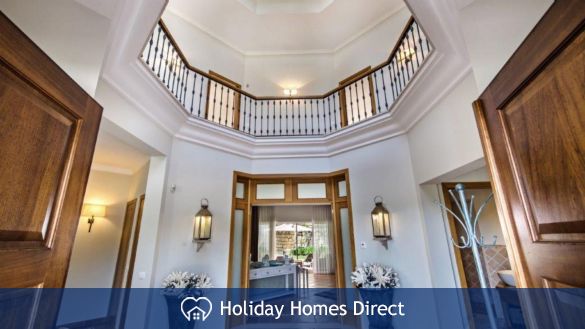 The Algarve Portugal, is one of Europe’s favourite holiday destinations and very popular with those looking for plenty of sunshine and the most beautiful and award winning sandy beaches in Europe. Families, couples, sports enthusiasts and those in love with nature will realise quite soon what makes the Algarve so popular to hundreds of thousands of Irish and UK holidaymakers, it’s excellent sandy beaches and guaranteed sun-drenched days, the relaxed and welcoming family atmosphere, the great choice of restaurants and lots of activities for all ages makes the Algarve the perfect location for your next holiday ,added to this the choice of golf courses and water sports spread across the Algarve makes it a year round destination. The Algarve boasts nearly 40 top quality golf courses with a selection for all level of players
The Algarve should also be known for beautiful rural countryside and its many historic attractions making it the perfect holiday destination for cycling, walking photography, painting, wine tasting, gastronomic and lots of other outdoor pursuits.
If you can spare some time visit some of the following towns along the Algarve, Faro, Loule, Monchique, and Lagos walk through the cobbled street and sample some of the finest food and wines. You will find some excellent value for money restaurants, the ideal way to relax and unwind.
The stunning sandy beaches of The Algarve are one of the major attractions; some of the best beaches in the world are located on the Algarve with plenty of “Blue Flag “to prove it. Put together the weather, beautiful beaches, lots of activities, value for money and you will be guaranteed the perfect holiday, try the Algarve you will not be disappointed.

Activities in Quinta do Lago

Fashionable boutiques, elegant furniture and cultivated gastronomy. If you are looking for something special, go and see Quinta Shopping. Located directly at the entry of Quinta do Lago, this elegant shopping mall boasts: -fashionable boutiques -luxurious interior shops -excellent Chinese and Italian restaurants -real estate agencies specialised on top properties -an English pub, and many other shops and gastronomic facilities. Next to Quinta Shopping at Bougainvillea Plaza you also find most items for your daily needs, e.g. super markets, a bank, a newsstand, etc.

The Vale do Lobo Tennis Academy has 10 hard courts, 4 synthetic grass courts as well as a mini-tennis and paddle tennis court. One of the largest tennis facilities in Portugal, it attracts national and international tennis fixtures, including an annual ATP Seniors Tour competition, the Vale do Lobo Grand Champions Caixa Geral de Depósitos, and the Portuguese Ladies´ Open. A gym, swimming pool, pro shop and two restaurants overlooking the courts complete the facilities.

The Tennis Academy´s team of professional coaches is led by Pedro Frazão, who was one of Portugal´s best tennis players and is now recognised as the country´s top coach, with European and American coaching certificates. He is also a Director of the European Professional Tennis Association. The Tennis Academy runs a busy year-round programme of individual and group coaching, tournaments and social events, for members and holidaymakers.

The Ria Formosa Natural Park is one of the most amazing places in the Algarve, not only for its variety of landscapes but also because of its unique location. Recently elected as one of the 7 Natural Wonders of Portugal, this is one of three protected areas not to be missed during your holiday in the Algarve. This is a unique coastal lagoon which is constantly changing due to the continuous movement of winds, currents and tides. Classified as a Natural Park in 1987, the Ria Formosa encompasses an area of about 18 000 hectares, and is protected from the sea by 5 barrier-islands and 2 peninsulas: the Peninsula of Ancão that the locals call island of Faro, the Barreta Island also known as Ilha Deserta, the Culatra Island (where the lighthouse of Santa Maria is located), the Island of Armona, the Island of Tavira, Cabanas Island and finally the Peninsula of Cacela.

This awesome area extends along the leeward coast of the Algarve through the municipalities of Loulé, Faro, Olhão, Tavira and Vila Real de Santo António. Due to these natural features and its geographical location it was included in the list of wetlands of world-wide interest defined by the Ramsar Convention. In this protected area you may witness many different habitats such as barrier-islands, marshes, tidal flats, islets, dunes, salt pans, fresh water lagoons, agricultural areas and woodlands which hold a an impressive diversity of flora and fauna.

There are three golf courses in total within the overall plan of Quinta do Lago - namely Quinta do Lago North & South, and San Lorenzo. The two Quinta do Lago courses form the golfing options of the playing members of the Club. Both courses are characterised as parkland courses wending their way through the Mediterranean pines that line the fairways, and offering tantalising views of the large houses and plots that make up the resort. The South course, designed by William Mitchell, is the championship course and has been host to the Portuguese Open on seven different occasions.

The first nine holes wind through parkland, and the back nine loops around the lake from which the resort gets its name. The North course, nine holes designed by William Mitchell and nine holes designed by Rocky Roquemore. though not so famous as its southerly neighbor, is equally enjoyed by members. The third course, San Lorenzo, is situated on the coast in the South Eastern most part of Quinta do Lago and does not form part of the golfing rights of CGQL members. There is another course, associated with the Quinta do Lago complex which opened in October 2008 called Laranjal. This course is situated approximately 2 km east of Quinta do Lago in the Ludo valley.

Note: All prices based on 7 nights accommodation, per 5-bed villa per week. , all prices are from