Two adjoining luxury apartments, each sleeps 5, with two bedrooms, bathroom, equipped kitchen, hall, lounge with South facing balconies so all day sunshine. These apartments can be rented individually or as a pair. Located in the centre of Carvoeiro and at just a 5 minute stroll to the local sandy beach and the Atlantic Ocean. Very near to an abundance of bars, restaurants, hotels like the well-known Tivoli-Almansor hotel and Mirachoro hotel, small shops and with all amenities close by, even a GP and a pharmacy. At the rear of the apartments is the large communal swimming pool with separate child section and pool shower and a lounge chair waiting for you. Enjoy a relaxed and careless holiday-vacation near the historic cities of Portimao, Silves, Albufeira and Lagoa and see the fishermen’s boats depart for their nightly activities when you have a drink on one of the many terraces near the ...

...beach. Several well-known golf courses like Gramacho, Vale da Pinta and Vale do Milho are close by, as is the race track, the Praia da Rocha casino, the Arade music hall in Portimao and several other nice things to do. Visit our own sites for suggestions. YOUR APARTMENT, either Aurora Mar 207 or the next door 208 (or both when you holiday with a larger number of people- each sleeps 5) Your vacation home is very well located on the second and floor with an elevator. It has a nice balcony/terrace with views to the South, so all day sunshine. The apartments are very complete with lounge/diner with airconditioning, TV set, kitchen equipped with microwave, oven, cooker, washing machine, freezer/fridge and lots more including toaster, kettle. Satellite TV in the lounge, free Wifi available. Pets allowed The spacious double bedroom with fixed wardrobes is large enough for an extra bed or cot (provided and included in the price!)). The second bedroom has two single beds and fixed wardrobes. The bathroom has a walk-in shower, washbasin and a toilet. The apartment sleeps 2-5 and a cot and high chair will be available (free of charge!) when required. Ideal for a summer holiday or long winter stay. Our prices are in Euro's per week, per apartment and are all-inclusive. (linen, beach- and bath towels, maid service, aircon, iron+board, end cleaning, etc. etc.). 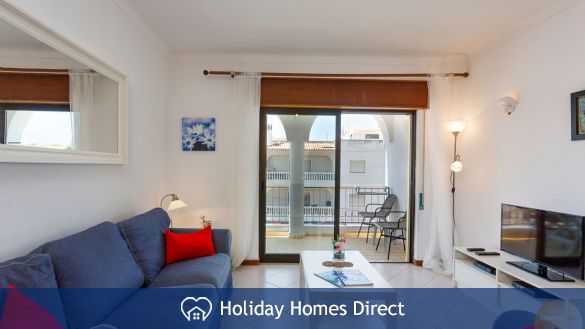 The typical Carvoeiro village with its small fisherman’s beaches and several other nice sandy beaches along the coast. Although Carvoeiro is now a real holiday village, the strict building rules have avoided that Carvoeiro has become one of the places with towering apartment buildings, like Albufeira or Armacao de Pera. The charm and character of Carvoeiro has been preserved. A very friendly village with lots of restaurants, bars and small shops and even 2 disco’s. Located close to 3 very good and nice golf courses, Vale da Pinta, Gramacho and a par-3 nine hole course called Vale do Milho. Also close by are the waterpark Slide and Splash in Estombar and Zoo Marine in Guia.
The Monchique village , or in full, Serra de Monchique, is just 20 minutes away from your apartment. Monchique is a must see village and aready the winding road to the village, with lots of handycraft shops and restaurants, is very attractive.
The market village is especially known because of the very high location and most impressive views. The highest part of the mountain is the township Foia where there are even pick-nick tables and places where you can drink the natural water from the wells of which people say that the water has a healing effect against many illnesses. Caldas de Monchique is where the old Spa is being re-vitalised; e great place to relax. Even at a night with clear sky the Monchique mountain range is impressive; you never believed that there were so many stars visible with the naked eye.

The nearest beach is the Carvoeiro beach in the centre of the village. Another nearby beach is Praia de Centeanes. Further East are Praia de Benagil, Praia do Carvalho and Praia da Marinha. To the west are the beaches near Ferragudo, a lovely village to visit, and the well known Praia da Rocha, which is also one of the larges beaches of the Algarve. Many years ago this beach was developed by building a large dam in the Ocean and at the entrance to the Arade River. Since then many apartments, hotels and shops were built and gradually the Praia da Rocha holiday village arose. Now, a place to walk along the boulevard/promenade and to enjoy the livelihood , see and meet people but also to relax at the beach. Further West are the beaches Praia do Vau, Praia do Alemao, Praia dos Tres Irmaos and, of course, the well-know Alvor beach. Close to our Carvoeiro apartments lies the village Ferragudo. A lovely unspoiled authentic fisherman’s village. A small village with a small tidal harbor and many good fish restaurants along the boulevard. The village was built against the slope of a hill with the church as central point. From here you have a very nice view on the Arade river, the Atlantic and, of course, Portimão. Every 4 weeks there is a bric-a-brac market in Ferragudo. Here you will find all kinds of second hand articles at very reasonable prices (after negotiations!). The village square has a very special atmosphere with lots of terraces, tobacconists and small shops. A stroll through the small and narrow streets of Ferragudo will make you enjoy the beautiful Algarve even more. Beaches like Praia Grande, Pintadinho, Praia dos Caneiros with the famous beach restaurant will leave an impression for life. The Serra de Monchique also protects the Algarve against the colder Northerly winds and stops the showers from the North.'And when you are roaming around Monchique, do use the opportunity to have a delicious Frango Piri-Piri in one of the basic local restaurants.
Silves and the old Castle. In the many years that the Moors occupied this part of Southern Europe, the small city of Silves used to the Capital of the Algarve. In importance, construction, size and appeal it found it equals in the lush cities in Andalusie, Spain, like Sevilla and Cordoba where you find the famous Al Hambra, for example.
In many old buildings within the walled old city you can still find many traces of this occupation.
The remains of Silves Castle are worth a visit. On the large terrace in front of the castle and the very old church, Brazilian music is often played on Sunday afternoons and a visit to the August Medieval Festival is an attraction. So is the Silves Beer Festival, by the way…………. There are many authentic small restaurants in Silves where you can eat the local Cataplana or very good seafood, while listening to the Fado music.

-Fly to Faro
-rent your car through Faroairport-carrental. com
-or take a shuttle service or taxi.
-Alternatively, fly to Lisbon or Sevilla (about 2.5 hours from your apt.)

Payment by bank transfer or on your card through Transferwise.com. 50% in 3 days of your booking, 50% just 60 days before the start of your holidays. View our sites Algarve.NU for cancellation policy.

Note: Prices per apartment per week, max 5 people. All included. NO extra cost whatsoever when normal use. Also NO charge electricity, Airco, Wif, end-cleaning, cot, dog or whatever!

Flexible change over days. Departure 10 am, entry 03 pm.
Do check our own availability calendar on