Stunning luxury house in the heart of Tara Golf & Country Club, Bradenton Florida 7152 Drewry’s Bluff is a stunningly designed luxury house situated on the exclusive Tara Golf & Country Club, in the heart of the beautiful city of Bradenton, Florida. This beautiful holiday home boost’s bright and airy living spaces and spacious bedrooms. It has 3 bedrooms and 2 bathrooms which have been designed with comfort and style in mind. The house is fully air conditioned and is furnished to an exceptional high standard throughout. There is also a large bright kitchen with a breakfast bar, TV/Sitting room which is fully equipped with everything you need for a wonderful stay. Our pool is enclosed under a custom-made lanai, a roof topped veranda, which allows for full privacy this also overlooks a large tranquil lake with a view of the Tara Preserve 9th Hole. You also have an option ...

...to have the pool heated, at a fee of £65.00 per week. Guests have full use of the gas barbecue, outdoor dining space and beautiful enclosed private gardens, which makes this house an ideal choice for outdoor entertaining during your holiday / vacation stay. Our bedrooms ar designed for ultimate comfort in mind for our guests. The master bedroom has a super king size bed with en-suite bathroom, whilst bedroom number two has a spacious double bed. The other bedroom has twin beds, which are ideal for sharing. If you are looking for a luxurious and relaxing vacation, then 7152 Drewry’s Bluff is your ideal choice of destination. 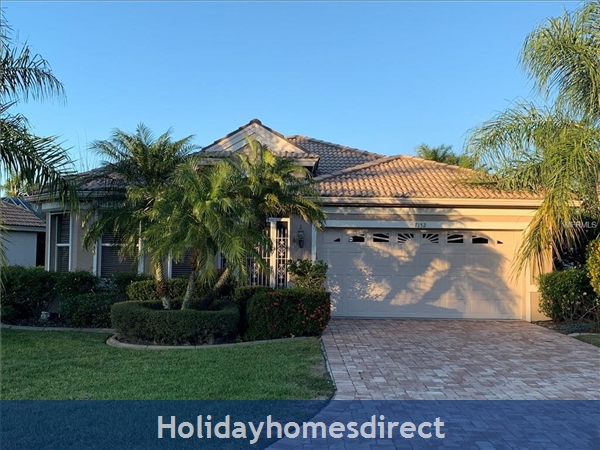 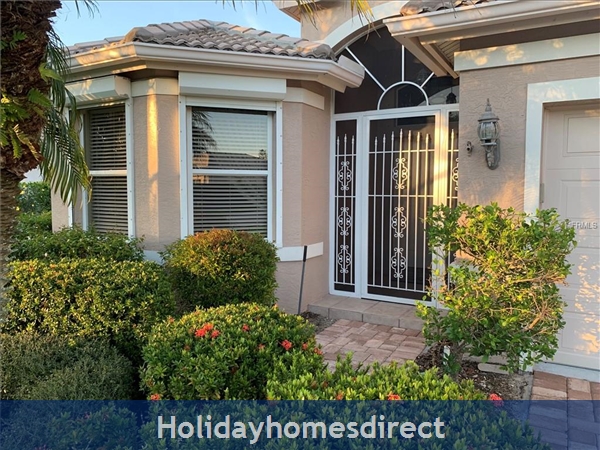 About Bradenton:
Our house is located in Bradenton Florida, a city home to many museums, parks, cultural amenities and a historic past. A visit to vibrant downtown Bradenton, the River Walk and the Village of the Arts is not to be missed. Bradenton is also a short drive from Gulf shores, such as Anna Maria Island, Holmes Beach and Bradenton Beach.

About Sarasota:
The beautiful city of Sarasota is a 25 minute drive from our house and is renowned for its cultural amenities, shopping and it white sandy beaches. It has regular festivals for the arts and culinary delights for food lovers. From sophisticated to leisurely, Sarasota's array of amenities makes it an unparalleled vacation destination.

Culturally elegant and brimming with adventure, yet laid back and tranquil. This is a vacation destination like no other.

Wrapped with 35 miles of silken beachfront, Sarasota and Her Islands is a package of rich cultural history, sun-drenched islands, natural treasures and unlimited discoveries

Sarasota is a city that offers something for everyone: pristine beaches, world-class shopping, international cuisine, renowned museums and galleries, Florida's signature water sports and outdoor activities, the serenity of aquariums and botanical gardens, and the excitement of friendly street festivals. From sophisticated to leisurely, Sarasota's array of amenities makes it an unparalleled vacation destination.

A 20min drive will bring you to Outlet malls, Long boat Keys and Anna Marie Island are approximately a 45min drive. Bush Gardens, Adventure Island, Mayakka State Park and Venice where you can Wind Surf or simply enjoy the beautiful White Sandy Beaches with there amazing Sunsets.This is also a 45min drive away.

Sarasota has a thriving theater & arts district and parallel to the coast are several islands with great beaches--among them are Longboat Key and Anna Maria Island off of Bradenton.

Downtown Sarasota thrives in the afterglow of Ringling’s love for things artistic. The Theater and Arts District encompasses theaters from experimental to opera. Art galleries are rife, particularly along Main Street and Palm Avenue, and trendy restaurants give the town a reputation for fine and innovative dining. Historic and artistic pockets of antiquing, gallery-hopping and cafés crop up at Herald Square and Southside districts. Towles Court Artist Colony revitalized a bungalow neighborhood with sprightly paint jobs, galleries, studios, eateries and other artistic outlets. Circus Sarasota keeps alive the Big Top tradition and the high schools even teach circus skills and stage annual circus events.

Art takes to the street along downtown’s bayfront, home to a charter fleet, park, name luxury resorts, the striking Van Wezel Performing Arts Hall and a nearby hands-on museum.

The beach lies steps away, part of a broken chain of sand that spreads north and south. At the north end of Lido Key, Mote Aquarium conducts important research on sharks, manatees, sea turtles and their crucial habitat. Tour the facility, where you can watch sharks and manatees in huge aquariums, pet stingless sting rays, or take a nature encounter cruise.

Across the pass to the north, Longboat Key stretches past golf and tennis resorts, restaurants with a reputation, shops and lovely manicured vistas fronting affluent homes. Anna Maria Island is next in line and it contains three separate communities.

Anna Maria Island is close to Bradenton, the city across the Intracoastal Waterway that starts off where Sarasota ends. Across the bridge from Bradenton Beach, time-frozen Cortez safeguards it fishing village way of life with a developing maritime museum and waterfront seafood houses. Fishing and eco-tourism excursions depart from the docks along with commercial boats.

Downtown Bradenton claims its Village of the Arts, where artists live, work and sell. Around Main Street, it resurrects a district once dependent on the Manatee River. Visit the sophisticated South Florida Museum and its manatee mascot of many years. Have lunch on the river and peruse the antique shops. Across the river, Palmetto, once strictly a tomato farming and fishing town, is becoming a tourist destination with marina activity, museums, parks and restaurants worth the trip.

South of Sarasota, two bridges deliver you to the world-famous soft, white sands of Siesta Key, where lodging is as colorful and individual as the local population. So stay a while to shop and dine as casually or fine as you wish. Exclusive Casey Key to the south leads to Nokomis Beach, known for its fishing, particularly at North Jetty Park.

The South Jetty lies across the pass in Venice, shark tooth capital of the world (so called for the fossilized, prehistoric sharks teeth that wash upon the shores of Venice and Caspersen Beaches). The fossils roll up on the salt-and-pepper sands around the fishing pier and the annual Sharks’ Tooth Seafood Festival in April celebrates this dental phenomenon and the town’s bounty of fish.

Note: Prices are shown are based on 2 people sharing. Additional person €95.00 per week
Pool Heating €75.00 per week