Features: Open planned kitchen 1 double bedroom 1 bedroom with 1 single bed 1 bathroom Completely equipped to accommodate between 2 and 4 people. Ideal for al fresco dinning on the large terrace with BBQ and view of the Almijara Mountains. Villa located in a quiet corner of town although walking distance to beach and the supermarket each at about 500 to 600 meters. The villa has air-conditioning and heating for the colder evenings. This villa is part of a three villa complex, it can be rented individually or together for bigger groups. For more information on the other two villas, please visit Casa Alegría and Casa Sonrisa. These three villas can accommodate up to 24 people. Please contact us for winter deals. Pets not allowed Car not necessary Linen provided, towels provided OUTSIDE: private pool, terrace, terrace furniture, sunbeds, BBQ, parking area. INSIDE: satellite, air conditioning, heating, cd player, dvd player, radio, tv, washing machine, childrens highchair, cot, iron, ironin board, entryphone, double glazed windows and ... 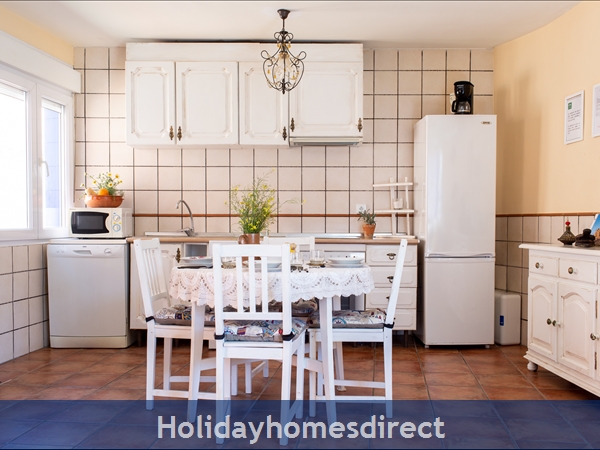 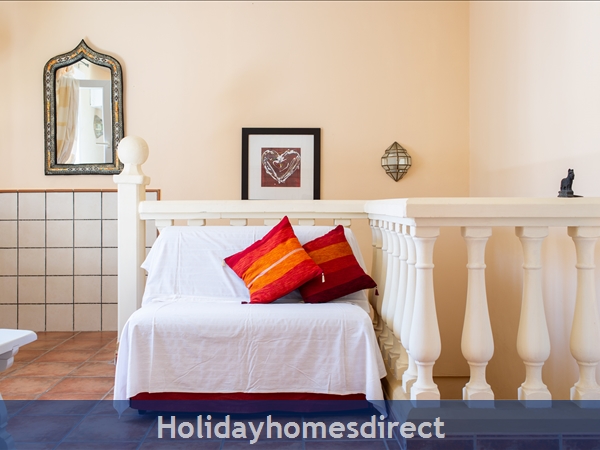 Nerja is situated on the coast east of Malaga, on the scenic Route of Sun and Wine. It is a very attractive white town that has maintained a great charm. The old part of the town, full of interesting shops and tapas bars, dates from the 14th century and has a labyrinth of narrow cobbled streets in typical Moorish style.

The mountains of the Sierra Almijara, which lie to the north of the town, finish abruptly at the Mediterranean in Nerja. The magnificent cliffs form natural coves and bays which stretch for miles along this part of the coast. There are 9 kilometres of well maintained and differing sandy beaches, shared by fishermen and sunbathers.
One of the most popoular spots within the town is the Balcón de Europa, built on the previous site of a 10th century castle, hanging over cliffs and beaches to gain better advantage of spectactular views. High arches and trees shade horses and carts that are transport around the town. The parish church of El Salvador, in the same area, is 17th century Baroque-Mudejar which has recently been restored.

On Burriana Beach there are internationally famous fish restaurants that, due to the mild climate, are able to remain open all year. Throughout the town there are numerous other restaurants that offer a wide variety of international cuisine.
Three kilometres from the town centre are the Nerja caves where skeletal remains and artefacts, dating from 30,000BC to the Bronze Age, were discovered in 1959.
Nerja was a Roman settlement known as Detunda. The Castulo-Malaca Roman road, which linked the provinces of Jaen and Almeria passed through Nerja and the remains can be seen on the outskirts of the town along with an old Roman bridge. Later, during Moorish occupation, the town was called Narixa, and flourished from agriculture and the silk trade. Nerja also has a history of sugar cane cultivation and the remains of refineries and the amazing intact five-storey Las Aguilas aqueduct built in the 1800s, which carried water to the local Maro sugar factory, can be seen.

To make a reservation we ask for a 25% deposit to be payed by bank transfer.
Balance can be payed either cash on arrival or by bank transfer 4 weeks prior to arrival.
a damage deposit of 150€ is payed cash the day of arrival and returned the day of departure if nothing has been damaged during your stay.
WIFI is free.
Bedlinnen and towels provided.

...to arrival.
a damage deposit of 150e is payed cash upong arrival.
cleaning before and after your stay is included in the Price.
Please contact us for long Winter deals

we are flexible with change over days.
Check ins are from 14 h
Check out before 10 am